My Next Obsession: Solid Lotion 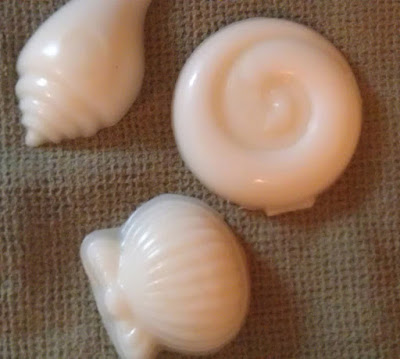 Two weekends ago I went to a quilt convention.  And tucked to one side of all the fabric booths a little table was set up.  The woman there was selling solid lotion.  It smelled amazing and wasn't expensive so I sprung for one.

I think the reason that I like it so much is that because I handle paper and fabric so often that any moisture in my hands is wicked away.  This solid lotion seems to moisturize better than anything that I've ever bought in the stores and well,

Sooo, I went on-line, found a recipe and made it today 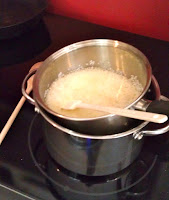 I used a double boiler system to melt all the ingredients and then poured it into my molds (and btw, I DO have a real one, I was a little concerned that I wouldn't get the smell of the lotion out of it so I just jury-rigged one using a cheap pan I bought from Wal-mart).

Since I was winging it, here are a few things I learned today:  Shea butter is finicky and gets grainy when over-heated.  Add it last and remove the pan from the heat AS SOON as it melts in the pan.

Add the Vitamin E while everything is still heating.  If you add it later, it curdles in the mold!

My lotion is a bit toooo melty.  When I make it again (and I will) I think I'll add less Coconut oil (maybe 6 ounces instead) and maybe add 2 extra ounces of bees wax.

Buy more molds than you think you need.  We had three mold pans and that wasn't NEARLY enough.  We ended up putting the extra portions in sippy cups!  Not good!

And last, a little fragrance goes a looooooong way!  I carefully put 14 drops in and my friend added a huge squirt more because she thought it "smelled a bit weak".  By the time we smacked the molds and packed everything up in their little tins, we REEKED of vanilla!

So get out there, be adventurous and make some SOLID lotion!
Posted by Joanna M. at 12:00 PM

Labels: products for the home/me