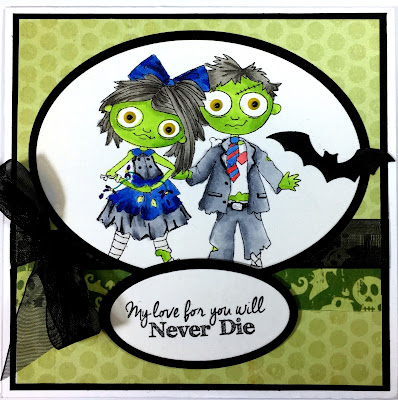 Our fearless leader, Anne, from the Sweet Sketch Wednesday 2 blog celebrates her 30th anniversary this month.  Since the traditional 30th anniversary gift is pearl, she requested that we make love/romance or pearl cards to help her celebrate.  She will give our winner a selection of pearl embellishments. 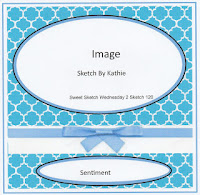 Even though I've been happily married for 17 years, I struggled with this challenge. I'm not sure that either card that I created is REALLY what Anne had in mind when she asked for "romance/love/pearl" cards!

My first card uses the SugarPea stamp set: Undying Love.  How fun is this one ... but in the end I decided it was a bit too Halloween-y.

So ... back to the drawing board I went.  My next card uses the Bugaboo image: Stella/Gus-Commitment and Insanity.  Again, I had my doubts.  Pretty much when you see a Gus and Stella card, true love is NOT what you think about!!

Oh well, I hope that you will join in the fun over on the Sweet Sketch Wednesday 2 blog and wish Anne and Martin a VERY happy anniversary. 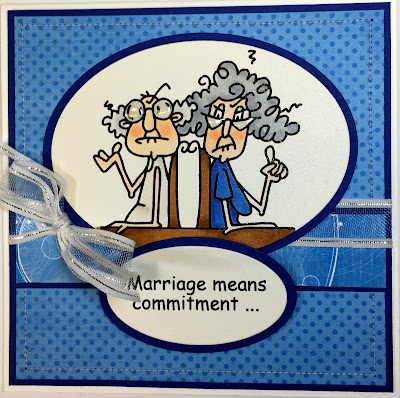 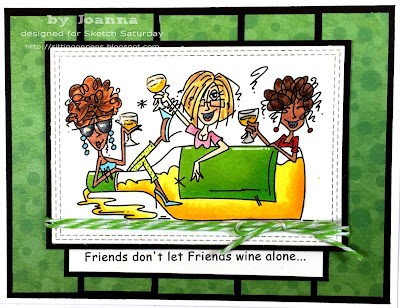 It's time for another challenge over on the Sketch Saturday blog.  This week we are sponsored by Bugaboo Stamps, one of my very favorite digital stores.  I love her snarky humor.  This week our winner will receive 4 digi-images. 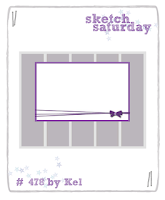 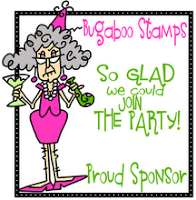 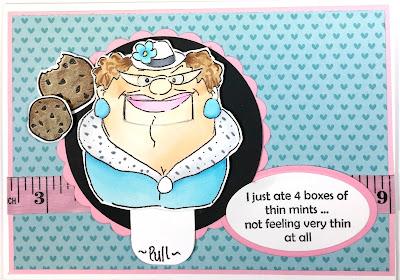 ... Or at least that's what I tell myself each night!!

I started coloring this image when the youngest needed to use my laptop.  I like to be around when he's using it ... you know, just to prevent him from accidentally deleting my operating system.  Not that this event has EVER happened before ...

Anyway, I just had the image in my file folder full of pre-printed/stamped images.  Then once I finished coloring, I wasn't entirely sure how to finish it.  I've only made ONE big mouth card so I had to watch a few YouTube videos to remind myself (what DID we do before YouTube?) 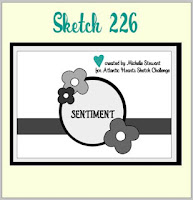 It turned out kinda cute.  I used the sketch from the Atlantic Hearts Sketch Challenge blog.
Posted by Joanna M. at 9:17 AM 8 comments: 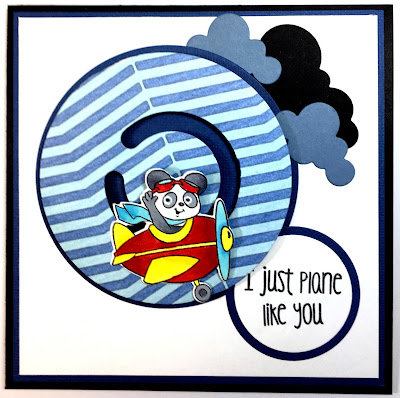 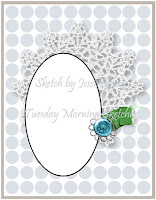 I used the sketch from the Tuesday Morning Sketches site.  I also used chevron paper to satisfy Jeannie's Chevron Chic challenge on her Dragonfly Journeys blog.

I'm also entering the following challenges
Addicted to Stamps: Anything Goes
Crafty Gals Corner: Punches And/Or Dies
The House that Stamps Built: Anything Goes
Posted by Joanna M. at 10:42 AM 7 comments:

Housework Will Suck The Life Out of You 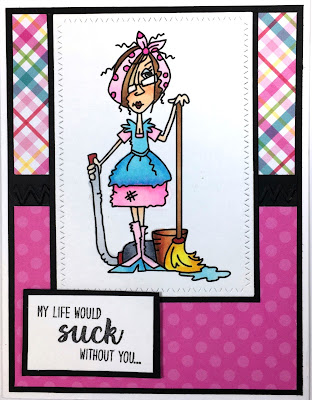 Something about driving to Torrington, Wyoming, watching an eclipse and then making a mad dash home to avoid traffic is tiring I guess!!  What a trip.  Me driving, and the other half using Google, Waze and any other driving app on his phone to direct me and avoid traffic.

I'm pretty sure that what we drove on was probably Farmer Brown's tractor road between his property and his neighbors.  But, to give the hubs his due ... it DID get us to the small reservoir that he had designated as our viewing area.  Had I not been so stressed about overturning the truck or getting stuck in mud, I would have taken a picture of the 12 turkeys that crossed the "road" right in front of us. 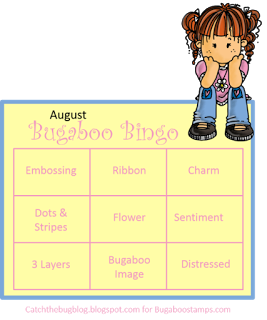 So instead of vacuuming myself, I settled for just coloring a picture of someone ELSE vacuuming!  I'm joining in the Catch The Bug Bingo Challenge.

I did the vertical row: Embossing (the little black strip separating my two DP is embossed with a zig-zag), Dots & Stripes and 3 Layers. 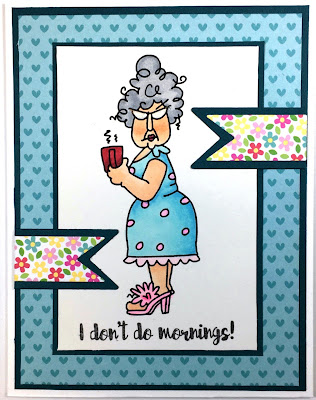 I had to go to the doctor this morning.  One of the questions she asked was "How much caffeine are you having each day?"  Apparently, "umm, a lot" was not the answer she wanted to hear.  Time to cut back.  This will not be a good time for my family; pray for their survival! 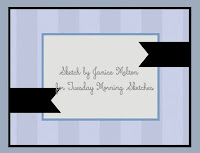 I'm joining in the challenge over on the Tuesday Morning Sketches site.  I really liked the simplicity of the sketch and their sponsor is one of my very favorites.
Posted by Joanna M. at 2:10 PM 5 comments: 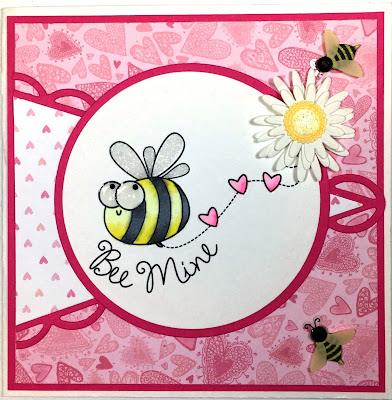 Back again for another challenge on the Sweet Sketch Wednesday 2 blog. 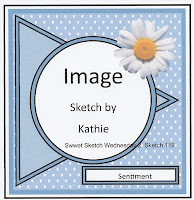 We have Sally-Ann returning from DigiStamp Boutique as our sponsor.  She will be giving our winner a £10 voucher to her store.

We hope that you will join in the fun this time. 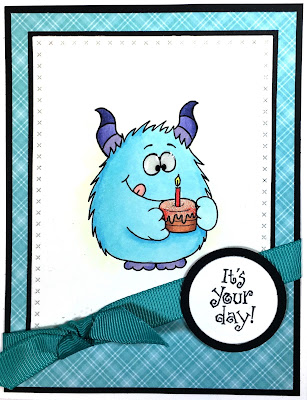 Now that I have more free time, I can once again participate in the progressive image challenges that I love so much.

This one is from Gerda Steiner.  The image is called, "I Didn't Eat It (Yet)."  If you buy the first image and make a card with it (which I had to do again, since I haven't played in three months) you will get the following month's image ... for free! 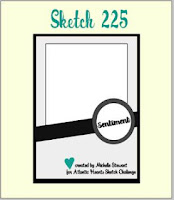 I'm using the sketch rom the Atlantic Hearts Sketch Challenge.  It's a fun one.
Posted by Joanna M. at 1:28 PM 7 comments: 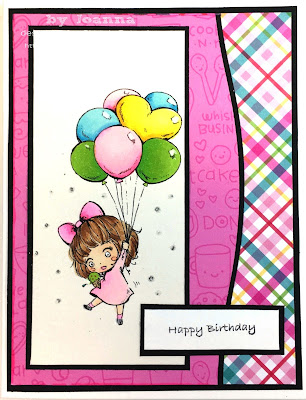 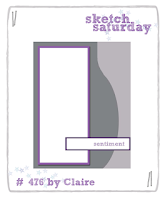 It's Saturday and that means it's time for another challenge on the Sketch Saturday blog.  We have a fun new sketch and the return of Sarah from StarStampz.  Sarah is providing our winner with 3 images from her Etsty shop.

I'm using her sweet "Ice Cream and Balloons" as the image for my card.

I'm also joining in the "Keen on Neon" theme over on the Dragonfly Journeys blog.

Please check out the rest of the DT's creations and give them some love. I hope you will give the sketch a try! 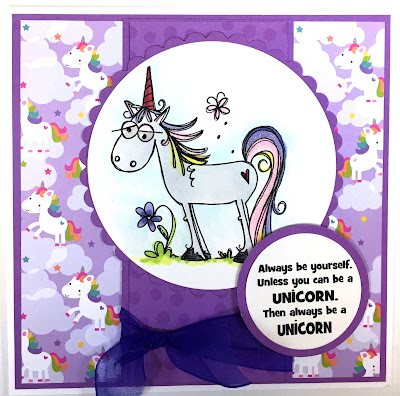 I've had NO time for fun these last two month and before I start studying for the next item on my list, I thought that I would squeeze in a few cards.

I bought this paper specifically for this image ... how sad am I?  OK, but look ... they both have unicorns on them.  How matchy-matchy and perfect is THAT?!!  Totally worth it.

I'm joining in the sketch fun over on the Catch The Bug Challenge blog.
Posted by Joanna M. at 8:53 PM 1 comment: 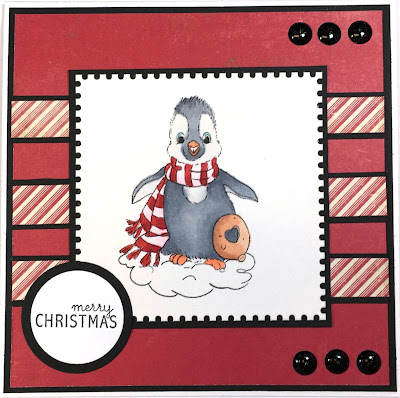 Can you believe that it's August already?  Yikes.  Where did the summer go?!!  My sons are already bemoaning the lack of summery days left to enjoy.  They go back in just 2 short weeks.  I'm actually excited by the date.  I will be done with school in 3 short days.  Yay. 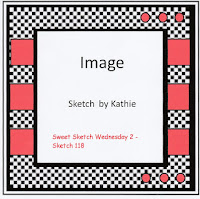 Today is also the start of a new challenge over on the Sweet Sketch Wednesday 2 blog.  This week we are sponsored by Cute As A Button. 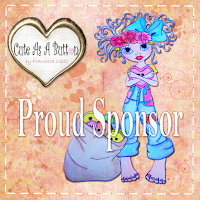