Sooo, what's been going on with YOU?!! 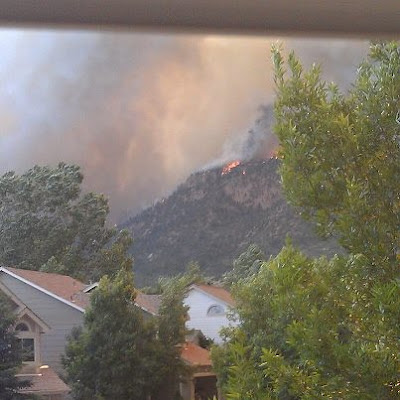 When I surf the net, looking at card candy, I rarely take notice of where those artists live.  I want to see those gorgeous cards.  And many of you have probably heard about the Colorado Waldo Canyon fire but some of you may not know that I live at ground zero, Colorado Springs.

I took this picture from my bedroom window, just moments before my family evacuated the area.  My family is safe but we are still evacuated to family in Denver.  Despite the fact that the fire was literally two streets away from us, our house as of right now is still standing and has no problems other than smoke damage at this point.  Unfortunately, there are still spot fires in the area and so it doesn't look like we will be allowed to go home for awhile.

We personally know six families who lost their homes and in total there are 347 homes that are gone.  So far only one person has been found dead in the rubble but 6 others are missing. 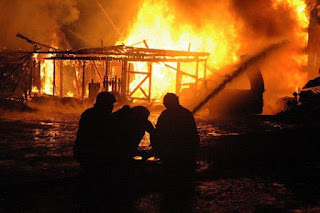 The day we evacuated, the entire family was away from the house.  As the boys and I drove toward home around 4, the smoke turned the sky to night and flakes of ash descended, making it seem like snow.  I pulled over and called the hubby, telling him that I needed him home NOW.  I could see flames.

I spent the next 25 minutes running around the house trying to figure out what was important ... kids, animals, laundry, medicine.  We had been given a "pre-evacuation" order three days earlier but then nothing so I had started to pull things back out of the luggage and started using them again.  Essentially, I was starting over!


As I finally finished loading the truck, the phone rang with the reverse 911 call telling us to get out.  The husband finally pulled up.  It had taken him 10 minutes to get from his work to the Safeway by us (5 minutes down the road) and then 25 to get to the house from there.  By this time police cars were driving up and down our street telling us to evacuate IMMEDIATELY.  We took off in two cars.

15,000 people were evacuated that night (over 32,000 have been displaced overall by the fire overall) so traffic was insane.  We managed to escape quite a bit of the traffic by leaving earlier.  We chose to use the minor highways rather than I25 and that proved to be a good decision.  We stayed on the 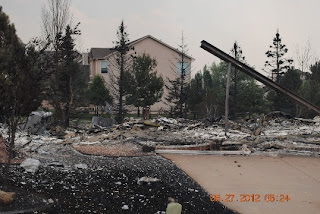 phone with each other for the majority of our almost 3 hour journey north to Denver.

I managed to escape wearing flip-flops rather than good shoes and only packed one pair of socks and underwear for myself (dork) but other than that ... I think we did a good job of getting out what needed to go.

We are in contact with our insurance company and suspect that we will have to do some painting and serious cleaning.  But we know that we are very, VERY lucky to have a house to go home to (even if that means being relocated for a few more days)

If you’d like to help with efforts in Colorado, here are a few links where you can donate.

I've snagged this photo essay from DenverPost.com. off a friend's blog.  And here are two other blogs that tell about the fire from another point of view:

High Hopes: Back to Nature challenge I couldn't sleep last night.  And after I cleaned a bathroom, finished a book ("Object of My Affection," I highly recommend it) and finished picking up the legos in the front room, I found my way to the craft room.

I needed a card to give DH for our anniversary.  It's 12 years this year.  This is Frog in Boxers 2.  Cute isn't he (kinda makes me want to see what Frog in Boxers 1 looks like!!)  I immediately fell in love with this stamp because DH has a pair exactly like that, except that he never wears his!  OK, too much information right?!!  Anyway, I knew that the image would bring a smile to DH's face.

I'm entering it into High Hopes: Back to Nature challenge.
Have a great day!
Posted by Joanna M. at 10:14 AM 1 comment: 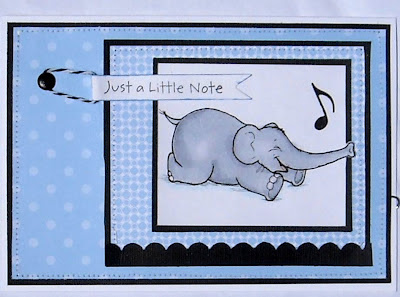 Happy Tuesday!  It's time for another challenge at Creative Card Crew.  This fortnight we're giving you the challenge of 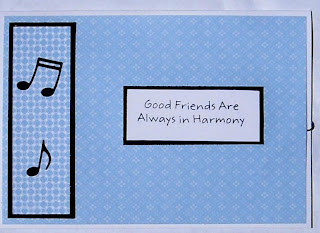 Our wonderful sponsor is Robyn's Fetish.  This digi is called "An elephant never forgets."  Isn't he the cutest?  Robyn is giving 5 (that's right, five) free digis to the winning card this week.  Yay.

I used the sketch from MFT for my card this week. 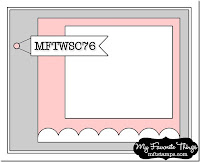 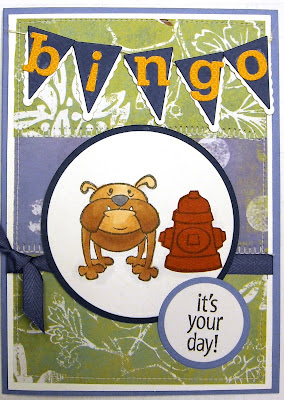 This week Creative Card Crew wants you to hum a little tune and make a card based on that song.  Easy right?  My guess is that there already IS a song tumbling around in your little brain right now. 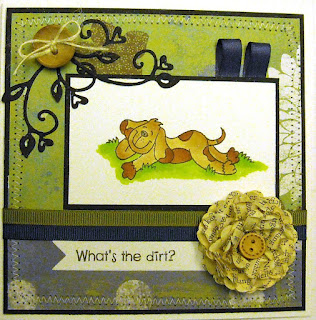 Sadly, for me, that song is Bingo.  You know the one ... "There was a farmer, had a dog and Bingo was his name-O  B-I-N-G-O" (now it's in your head too right?!!)  You are probably asking, "Why Joanna, why is such a lame song in your head instead of the latest Maroon 5, Coldplay or even Lady Gaga?"

The short answer is because my oldest is in 3rd grade and that's when the Music teacher introduces the recorder.  Caleb has fallen in love with that little torture device (I mean instrument).  I thought I was going to lose my mind when he played "Hot Cross Buns" over and over (and over and over) but now he has moved onto the hit song "Bingo."  I sincerely hope that soon we can move on to "Row, Row, Row Your Boat" or some other song, perhaps some Train?!!

I actually made two cards.  I wasn't sure that I liked my fist attempt (and I HAD to put BINGO somewhere on the card, right?)  All the yummy paper on both cards was sent to me from my lovely SS.  The kits she made were ... A-mazing!

Don't forget that YOU can cash in on the song stuck in YOUR head.  Make a card illustrating it and you can win a $20 gift certificate from our sponsor, Simon Says Stamp. So get off the computer, and sing or craft or ... maybe BOTH!
Posted by Joanna M. at 5:00 AM 2 comments: