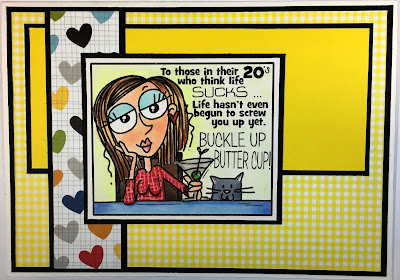 Not much accumulation ... only about 7 inches ... but since May is two days away, it feels like a lot.  But snowy days do make for fun days watching silly movies and crafting.

I'm joining in the fun over on the Paper Play Sketches site.  I rotated the sketch ... just cuz.  My image would have fit either way, it just felt right rotating it.

I'm using a fun image I picked up over on the Bugaboo site.  It made me giggle.
Posted by Joanna M. at 4:21 PM 2 comments: 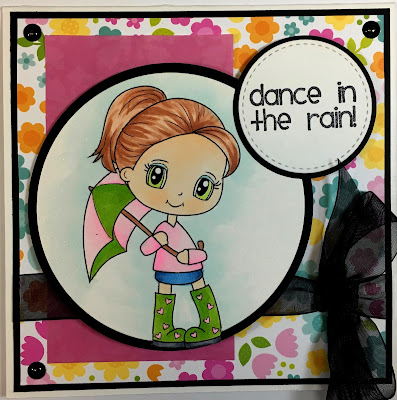 Time for another challenge over on the Sweet Sketch Wednesday 2 blog.  This week we have Sally-Ann Hancock from Digi-Stamp Boutique as our sponsor.  She's offering our winner a  £10 voucher to her her store. 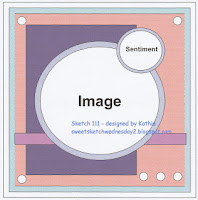 I'm using the image Umbrella Lulu for my card.

We hope that you have time to join in the fun this week. 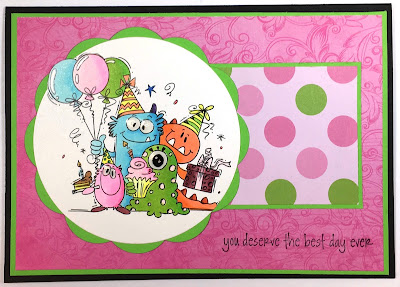 I've been under the weather for the past few days.  Colds on the weekend are the worst!  Today was the first day I felt well enough to head back to the gym.  On my way, I was trying to convince myself why I shouldn't go but I just kept driving.  Finally I arrived and just went in for the class.  Yay me.  I'm a little sore but I'm glad that I went.

I spent the rest of the day catching up on cleaning and finally allowed myself a bit of play time.  I joined in the sketch challenge on the Catch The Bug Challenge blog. 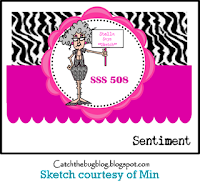 I have elements of the sketch but I kept changing it a bit until my card was quite different than the sketch! (like my image was too big to fit in the middle like it was supposed to and my secondary rectangle was supposed to have scallops but doesn't)  Oh well.  It's still a cute card. 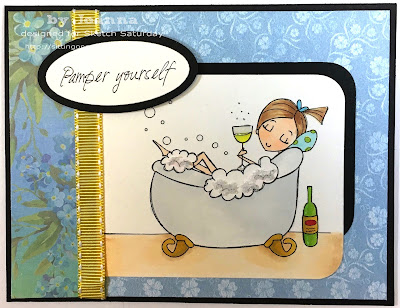 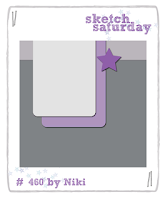 It's time for another challenge over on the Sketch Saturday blog.  This week we are sponsored by Sally-Ann from DigiStamp Boutique. She is offering our winner a £10 voucher to her store.

I rotated the sketch to fit the image I choose to use: Alyssa Relaxing.  I'm hoping to take my own advice and pamper myself this weekend.  Wine and a movie sounds FANTASTIC (tho maybe not in that order!)

I hope you have time to join in the fun this week.

Hip To Be Square 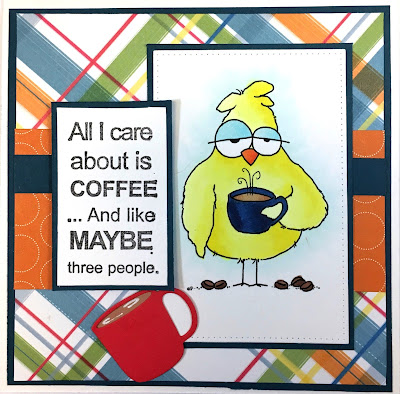 I found time to join in the sketch challenge over on the From The Heart blog this week.  Since Faith is still feeling under the weather, they are recycling an old sketch.  It's fine with me because it was a fun sketch (and honestly, I don't think I used it originally). 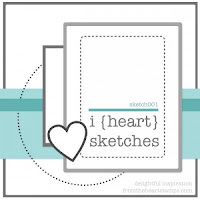 I'm using the "Birdbrain Needs Coffee" image.  One of my very favorite images in the From The Heart store and seriously, this could be a selfie of me on ANY given morning.

I'm also joining the fun over on the Dragonfly Journeys blog.  Her theme is Hip To Be Square ... I have a square card (and plus I'm a bit of a sci-fi nerd so that's square too)
Posted by Joanna M. at 2:11 PM 6 comments:

Labels: Dragonfly Journeys, From the Heart 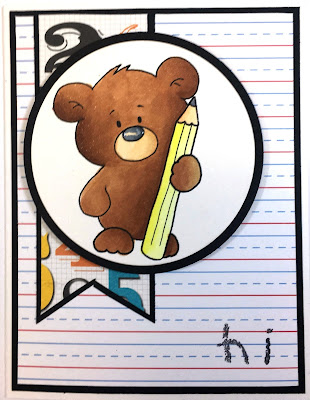 Getting my Gerda Steiner monthly challenge image done.  It's this darling little bear; his name is Pen Pal Bear.  I loved his little pencil and it seemed like a good opportunity to whip out some of my school papers to use.  By using this little bear, I will get next month's image for free. 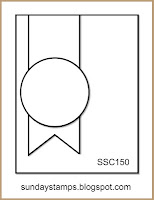 I'm also using the sketch over on the Sunday Stamps blog.
Posted by Joanna M. at 11:15 AM 5 comments: 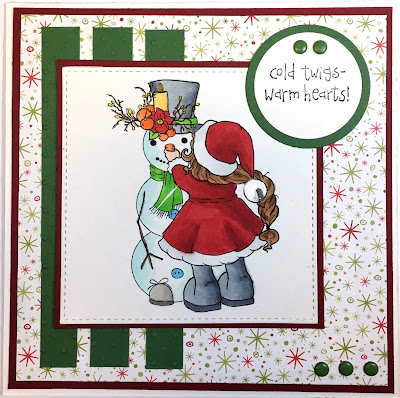 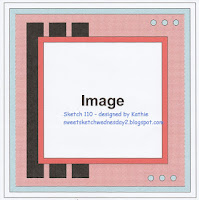 It's time for another challenge over on the Sweet Sketch Wednesday 2 blog.

We have a new sponsor for our challenge.  It's Little Blue Button.  Our winner will receive a $10 gift certificate to her store.   This week I'm using Miss Lily and the Snowman on my card.  It's never too early to start on my 2017 Christmas card stash!

Here is a bit more about Little Blue Button:

Little Blue Button Stamps started it's life in december 2012 as free digital stamps company "Digital designs by Olga".
Later in spring 2013 it was reborn as Little Blue Button Stamps and first Design Team started it's work.  In the summer of 2013 we started to produce rubber stamps which were pressed and packed by C.C.Designs company. In Fall 2014 we started to release clear stamps but due to some problems in my life I had to shut down both clear and rubber and continue with digital stamps only.  Now I continue to create designs for digital stamps and printables by LBBS and clear stamps for Russian store by Tamara Startseva.

I hope you have time to join in the fun 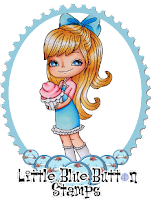 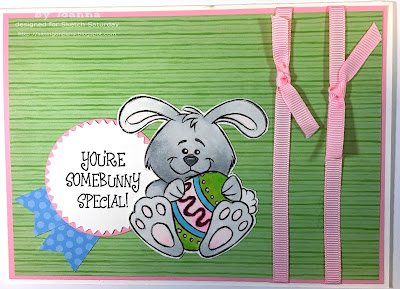 It's Saturday and that means it's time for a challenge over on the Sketch Saturday blog.  This week we have Krista from Drawn With Character as our sponsor.  Our winner will receive 3 digital images from her etsy shop. 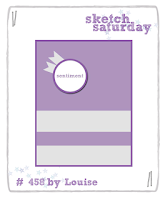 I rotated the sketch to better fit my image.  I'm using "Bunny Holding Easter Egg" to make my card. 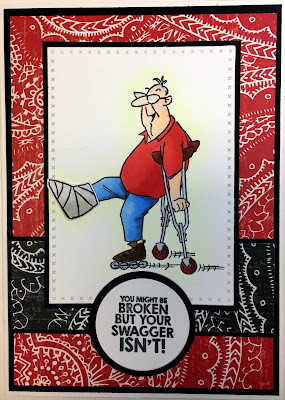 I'm pretty sure that I broke my friend.

I JUST bought this stamp set and the same day that it arrived, she slipped on some ice and broke her ankle.  Coincidence?  I think not.

Actually I bought this AI set because another friend's husband broke HIS leg on some ice too.  At the time, I wondered if I should also buy the woman set but I didn't.  I'm a little sad now because it would have been PERFECT!!  Oh well, next time I shop.

I'm using the sketch on the Tuesday Morning Sketches site.  I loved it's simplicity; so easy to use again and again. 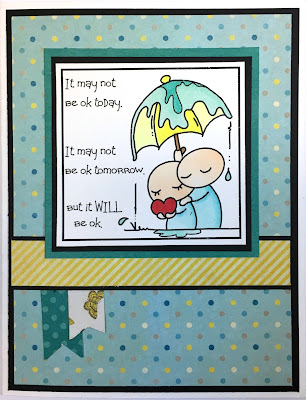 It's a snow day here.  Since we had the day off, I decided to make the youngest child finish his project for Language and Literature.  He had decided to make a game based on the book, Life As We Knew It and ... it wasn't nearly done.  Now granted, it isn't due for a week, but why put it off (especially since I had told him that if he wasn't done by Sunday, he shouldn't plan on going to his brother's birthday party)  Ouch, guess who is having to parent today?!!  Unfortunately he is notorious for doing things last minute and slap-dash

Thankfully, it is mostly done now (around 3:00 I was done with all the whining so I sent him on his way.)  In the blissful silence I made this card.  It's not a terribly happy card either (kinda fits the grey theme of the day) but I needed one for my neighbor. 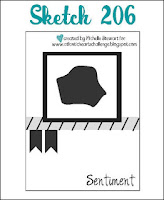 I used the sketch over on the Atlantic Hearts Sketch Challenge blog.  It totally fit my image from Bugaboo